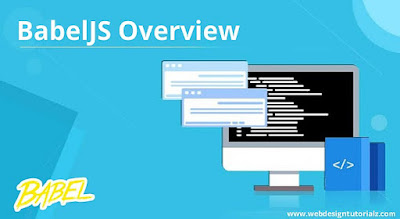 Babel.js is a JavaScript transpiler used for transpiling new features into old standards. Using this, the features can be run on both old and new browsers, hassle-free. BabelJS was developed by an Australian developers called Sebastian McKenzie.

JavaScript is the language that the browser understands. We use different browsers to run our applications such as Firefox, Opera, Chrome, Internet Explorer, Safari, Microsoft Edge, UC browser, iCab, etc. ECMA Script is the JavaScript language specifications; the ECMA Script 2015 ES6 is the stable version which functions fine in all new and old web browsers.

After ES5, we've had ES6, ES7, and ES8. ES6 released with a lot of features which are not completely supported by all web browsers. Same applies to ES7, ES8 and ESNext (next version of ECMA Script). It is now uncertain when it'll be possible for all browsers to be compatible with all the ES versions that released.

Incase we intend making use of ES6 or ES7 or ES8 features to write our code it will tend to break in some old browsers because of lack of support of the new changes. Hence, if we want to utilize new features of ECMA Script in our code and want to run it on all possible browsers available, we need a tool that will compile our final code in ES5.

Babel does same and it's called a transpiler that transpiles the code in the ECMA Script version that we want. It has features such as presets and plugins, which configures the ECMA version we need to transpile our code. With Babel, developers can write their codes using the new features in JavaScript. The users can get the codes transpiled via Babel; the codes can later be used in any browsers without any problems.

Following below table list down the features available in ES6, ES7 and ES8 -

The babel-transpiler converts the syntax of modern JavaScript into a form, which can be understood easily by old web browsers. For example, arrow function, const, let classes is going to be converted to function, var, etc. Here the syntax, that is the arrow function is converted to a normal function keeping the functionality the same in both the cases.

There are new features added in JavaScript such as promises, maps and includes. These features can be used on an array; the same, when used and transpiled via babel will not get converted. In the event the new feature is a method or object, we need to use Babel-polyfill along with transpiling to make it work on older browsers.

Following is the list of ECMA Script features that are obtainable in JavaScript, which can be transpiled and polyfilled -

ECMA Script features that can be polyfilled -

Plugins and Presets are config details for Babel to transpile the code. Babel supports a number of plugins, which can be made use of individually, if we know the environment in which the code will execute.

Babel presets are config details to the babel-transpiler that instructs Babel to transpile in a specific mode. We need to utilize presets, which has the environment in which we want the code to be converted. For example, the es2015 preset will convert the code to es5.

There are some features like methods and objects, which cannot be transpiled. At such instances, we use Babel-polyfill to facilitate the use of features in any web browser. Let us look at the example of promises; for the feature to work in older browsers, we need to use polyfills.

Babel-cli comes with a bunch of commands where the codes can be easily compiled on the command line. It also has features such as plugins and presets to be used along with the command making it easy to transpile the code at one go.

In this section, we'll learn about the various advantages of using BabelJS -

In this section, we'll learn about the various disadvantages of BabelJS - 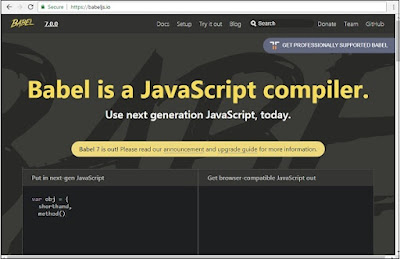 Alright guys! This is where we are going to be rounding up for this tutorial. In our next tutorial guide, we will be discussing about BabelJS Environment Setup