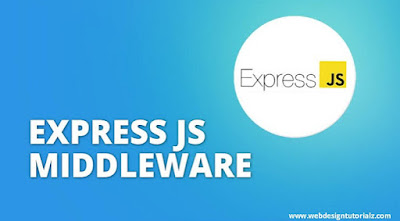 Below is a simple example of a middleware function -

The above middleware function is called for every request on the server. So after every request, we will get the following message in the console -

To restrict it to a particular route (and all its subroutes), provide that route as the first argument of app.use().

Now whenever you request any subroute of '/things', only then it will log the time.

In the following example, the first function runs first, then the route handler and finally the end function. This example summarizes how to make use of middleware before and after route handler; also how a route handler can be used as middleware itself.

When we visit '/' after running this code, we receive the response as Middle and on our console -

Now that we have known how to create our own middleware, let us discuss about some of the most commonly utilized middleware created within the community.

A list of third party middleware for Express is available here. Following are some of the most commonly used middleware; we'll also learn how to use/mount these -

This is used to parse the body of requests which have payloads attached to them. To mount body parser, we need to install it via npm install-- save body-parser and to mount it, include the following lines in your index.js -

To see all available options for body-parser, visit its GitHub page.

This middleware parses Cookie header and populate req.cookie with an object keyed by cookie names. To mount cookie parser, we need to install it utilizing npm install -- save cookie-parser and to mount it, include the following lines in your index.js -

This creates a season middleware with the given options. We'll discuss about its usage in the Seasons tutorial.

We have many other third party middleware in ExpressJS. However, we have discussed only a few vital ones here.