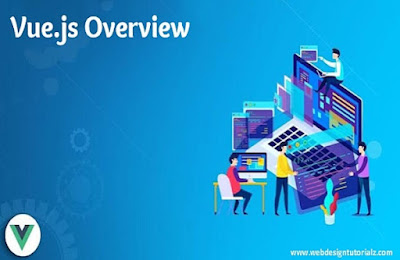 Hello folks! welcome to a brand new tutorial series on Vue.js. This tutorial series is going to give readers much understanding on the various functionalities of Vue.js from where they can take themselves to the next level.

It is an open-source progressive JavaScript framework used to develop interactive web user interfaces. It's one of the most popular frameworks that is used for simplifying web development. Vue.js focuses on view layers. It can be easily integrated into big projects for front-end development without issues.

Installation for Vue.js is every easy to start with. Any developer can easily understand and build interactive web user interfaces in a matter of time. Vue.js is created by Evan You, an ex-employee from Google. The first version of Vue.js was released in Feb 2014.

Following below are the features available in Vue.js -

The data binding features helps manipulate or assign values to HTML attributes, change the styles, assign classes with the assistant of a binding directive called v-bind available with Vue.js.

Vue.js has built-in directives such as v-bind, v-if, v-else, v-show, v-on, and v-model, which are used to carry out various actions on the front-end.

Vue.js can be installed at the command line via vue-cli command line interface. It helps to build and compile the project easily.

Navigation between pages is done with the help of vue-router.

Components are one of the vital features of Vue.js that helps to create custom elements, which can be reused in HTML.

This is one of the vital features of Vue.js. It helps listens to the changes made to the UI elements and then performs the necessary calculations. There is no need of additional coding for this.

v-on is an attribute that is added to the DOM elements to listen to events in Vue.js.

Vue.js uses virtual DOM, which is also used by other frameworks such as React, Ember, etc. The changes are not made to the DOM, instead a copy of the DOM is created which is available in the format of JavaScript data structure. Whenever any changes are to be made, they are made to the JavaScript data structures and the second is compared with the original data structure. The last changes are then updated to the real DOM, which the user will see changing. This is nice in terms of optimization, it is less expensive and the changes can be made at faster rates.

The Vue.js script is very lightweight and the performance is also very fast.

Watchers are applied to data that changes. For example, form input elements. Here, we don't have to add any extra event. Watchers takes care of handling any data changes.

Vue.js makes available many ways to apply transition to HTML elements when they are added/updated or removed from the DOM. Vue.js has inbuilt transition component that need to be wrapped around the element for transition effect. We can easily include third party animation libraries and also add more interactivity to the interface.

Comparison with Other Frameworks

Now we will be comparing Vue.js with other frameworks such as React, Angular, Ember, Knockout, and Polymer.

Vue.js and React both makes use of virtual DOM, which makes it faster.

Vue.js uses html, js and css separately. It's very easy for a beginner to understand and adopt the Vue.js style. The template based approach for Vue.js is very easy.

React uses the JXS approach. Everything is JavaScript for ReactJS. HTML and CSS are all part of JavaScript.

React uses create react app and Vue.js uses vue-cli /CDN/npm. Both are very easy to use and the project is set up with all the primary requirements. React needs webpack for the build, whereas Vue.js doesn't. We can begin with Vue.js coding anywhere within jsfiddle or codepen using the cdn library.

React is well know in comparison to Vue.js. The job opportunities in React is more than Vue.js. A big name is behind React and that is Facebook which make it more prominent. Since React makes use of the core concept of JavaScript, it utilizes the best JavaScript practices. Anyone who work with React will definitely be very good with all of JavaScript concepts.

Vue.js has a lot of similarities with Angular. Directives like as v-if, v-for are almost alike to ngIf, ngFor of Angular. They both have a command line interface for installations of projects and to build it. Vue.js uses Vue-cli and Angular uses angular-cli. Both of them offers a two way data building, server side rendering, etc.

Vue.js is very simple to learn and start with. As discussed earlier on, a beginner can take the cdn library of Vue.js and then get started in codepen and jsfiddle.

For Angular, we need to go through a series of steps for Installation and it's little difficult for beginners to get started with Angular. It uses TypeScript for coding which is difficult for developers coming from core JavaScript background. Nonetheless, it's easier for the users belonging to Java and C# family.

To decide the performances, it is up to the users. Vue.js file size is greatly lighter than Angular. A comparison of the performance of the frameworks is given in the following link http://stefankrause.net/js-frameworks-benchmark4/webdriver-ts/table.html

Currently, Angular has more popularity than Vue.js. So many organizations use Angular, making it so popular. Job opportunities are also more for candidates with experience in Angular. But, Vue.js is taking up the place in the market and can be regarded as a major competitor for Angular and React.

Angular gives so many built-in features. We have to import the needed modules and get started with it, for example @angular/form, @angular/animations.

Vue.js does not have all the built-in features as Angular and requires to depend on third party libraries to work on it.

Vue.js can easily be merged with any other big project without any issues. Angular will not be that easy to begin working with any other existing project.

The latest version of Vue.js is 3.2.33 and it's good with backward compatibility. It makes available good documentation, which is very easy to understand.

Angular use TypeScript for its coding. Users needs to have a knowledge of Typescript to get started with Angular. But we can begin with Vue.js coding anywhere in codepen or jsfiddle via the cdn library. We can work with the standard JavaScript, which is very easy to start with.

Vue.js also has command line too vue-cli to start and build projects.

They both have features such as template, router, and component which makes them very rich as the UI framework.

Knockout provides a good browser support. It's supported on the lower version of the IE whereas Vue.js is not supported on IE8 and below. Knockout developments has slowed down over time. There isn't much popularity for the same in recent times.

On the other hand, Vue.js has began to gain popularity with the Vue team giving regular updates.

Polymer library is developed by Google. It is used in many Google's products like Google I/O, Google Earth, Google Play Music, etc. It gives data binding and computed properties similar to Vue.js.

Polymer custom element definition is made of JavaScript methods, element properties, plain JavaScript/Css, and lifecycle callback. In comparison, Vue.js allows to easily make use of JavaScript/html and CSS.

Polymer uses web component features and needs polyfills for browsers, which does not support these features. Vue.js doesn't have such dependencies and functions fine in all browsers from IE9+.


Alright guys! This is where we are going to be rounding up for this tutorial. In our next tutorial, we will be discussing about Vue.js Environment Setup.