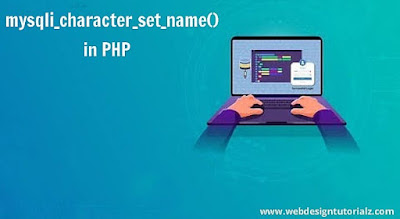 Hello folks! welcome back to a new edition of our tutorial on PHP. In this tutorial guide, we are going to be studying about the PHP mysqli_character_set_name() Function.

The mysqli_character_set_name() function returns the name of the default character set of the current database connection.

Following below is the syntax to use this function -

This built-in PHP function returns a string value representing the name of the current character set.

This built-in function was first introduced in PHP version 5 and it works in all of the later versions.

Try the following example below -


Alright guys! This is where we are rounding up for this tutorial post. In our next tutorial, we are going to be studying about the PHP mysqli_close() Function.

Do feel free to ask your questions where necessary and we will attend to them as soon as possible. If this tutorial was helpful to you, you can use the share button to share this tutorial.

Do follow us on our various social media handles available and also subscribe to our newsletter to get our tutorial posts delivered directly to your emails.