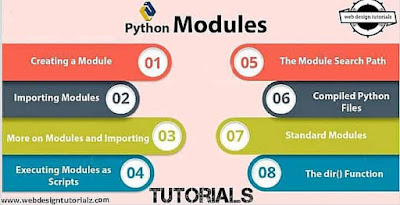 Hello dear readers! Welcome back to another edition of our tutorial on Python. In this tutorial guide, we are going to be studying about the Python Modules.

A module allows you to logically organize all of your Python code. Grouping related Python code into a module makes the code easier to understand and use. A module is a Python object that has an arbitrarily named attributes that you can bind and reference.

A module is a file that consists of Python code. A module can define functions, variables and classes. A Python module can as well include a usable code.

The Python code for a module that is named aname normally resides in a file named aname.py. Below is a very simple example of a simple module, program.py.

The Python import statement has the following syntax -

For example, to import the module program.py, you will need to put the following commands at the top of the script -

A Python module is loaded only once, irrespective of the number of times it is imported. This prevents the module execution from taking place repeatedly if multiple import occur.

Python from statement lets you to import specific attributes from a module to the current namespace.

The from...import has the following syntax -

To import the function fibonaci from the module fib, then use the following statement -

This gives an easy way to import all the items from the module into the current namespace. However, this statement should be sparingly used.

Whenever you import a module, the interpreter searches for the module in the following order -

The module's search path is stored in the system module sys as a sys.path variable. This variable contains the current directory, and installation-dependent default.

The PYTHONPATH variable is an environment variable, that is made up of a list of directories.

The syntax of PYTHONPATH is the same as that of the shell variable PATH.

Below is a typical PYTHONPATH from a Windows system -

Below is a typical PYTHONPATH from a UNIX system -

Variables are names (identifiers) that map to objects. A namespace is a dictionary of variable names and their corresponding objects.

Each functions has its own local namespace. The class methods follow the same scoping rule as the ordinary functions.

Python makes educated guesses on whether variables are local or global. It simply assumes that any variable that is assigned a value in a function is local.

Therefore, in order to assign a value to a global variable within a function, you must first make use of the global statement.

The statement global VarName tells Python that VarName is a global variable. Python then stops searching the local namespace for the variable.

For example, we defined a variable Money in the global namespace. Within the function Money, we then assign Money a value, so Python assumes that Money is a local variable. However, we obtained the value of the local variable Money before then setting it, so an UnboundLocalError is the result. In order to fix this problem, you will uncomment the global statement.

The dir() function returns a sorted list of strings which contains the names defined by a module.

The list contains the names of all modules, variables and functions that are defined in a module.

Following is a simple example -

Here, the special string variable __name__ is the module's name and __file__ is the filename from which the module was loaded.

The globals() and locals() Functions

The Python globals() and locals() functions returns the names in the global and the local namespaces based on the location from where they are called.

If locals() is called from within a function, it returns all the names which can be accessed locally from that function.

If globals() is called from within a function, it returns all the names which can be accessed globally from that function.

The return type of both functions is a dictionary. So, the names can be extracted by using the keys() function.

When the module is imported into the script, the code that is in the top-level portion of a module is excuted only once.

Below is the syntax for the reload() function -

Following below is an example to reload hello module - 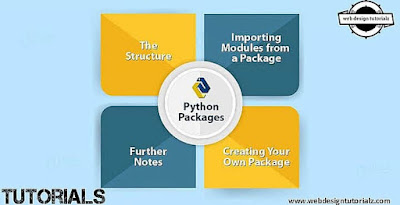 A Python package is a hierarchical file directory structure that defines a Python application environment that consists of modules and then subpackages & sub-subpackages, and so on.

Let us now consider a file Pots.py available in Phone directory. This file has following line of source code -

In similar way, we have another two files having different functions with the same name as above -

Create one more file __init__.py in your Phone directory -

In order to make all your functions to be available when you have imported Phone, you will need to put explicit import statements in __init__.py.

After you have added these lines to __init__.py, you have all these classes available when you import the Phone package.

Here, we took example of a single functions in each file, but you can keep multiple functions in your files. You can also decide to define various classes in those files and then create your packages out of those classes.


Alright guys! This is where we are rounding up for this tutorial guide. In our next tutorial, we are going to be studying about the Python Files I/O.